It you're thinking only a weed

I survey the mess of flowerpots I’d stored behind an outbuilding last fall. I hadn’t dumped them out, because I try to live by the advice given me by my former next-door neighbor, Mell. He always said, “Leave them and see what happens.” So I do. But honestly, I don’t expect much. This zone is too far north for annuals to live until spring. And unfortunately, even some of the so-called perennials call it quits when temperatures drop too often to the single digits (hold your hand up lantana).


A couple of chrysanthemums who are supposed to make it through the winter, now only have dry branches with no green shoots coming from the roots. Goners.  I toss them in a mulch pile. But another chrysanthemum has a few leaves at the base and shows promise, so I set it aside to repot  At first, another container seems barren but I see two little green points peeking through. They’re lilies. They, too, are expected to come back every year. I’ll put these in a bigger vessel with fresh earth.


The last pot in the group has turned over into a bunch of weeds. I pull it out, confident this one will join others in the mulch pile, but when I do, I see a long vine trailing from it, and it has buds. I realize it’s not just another weed. 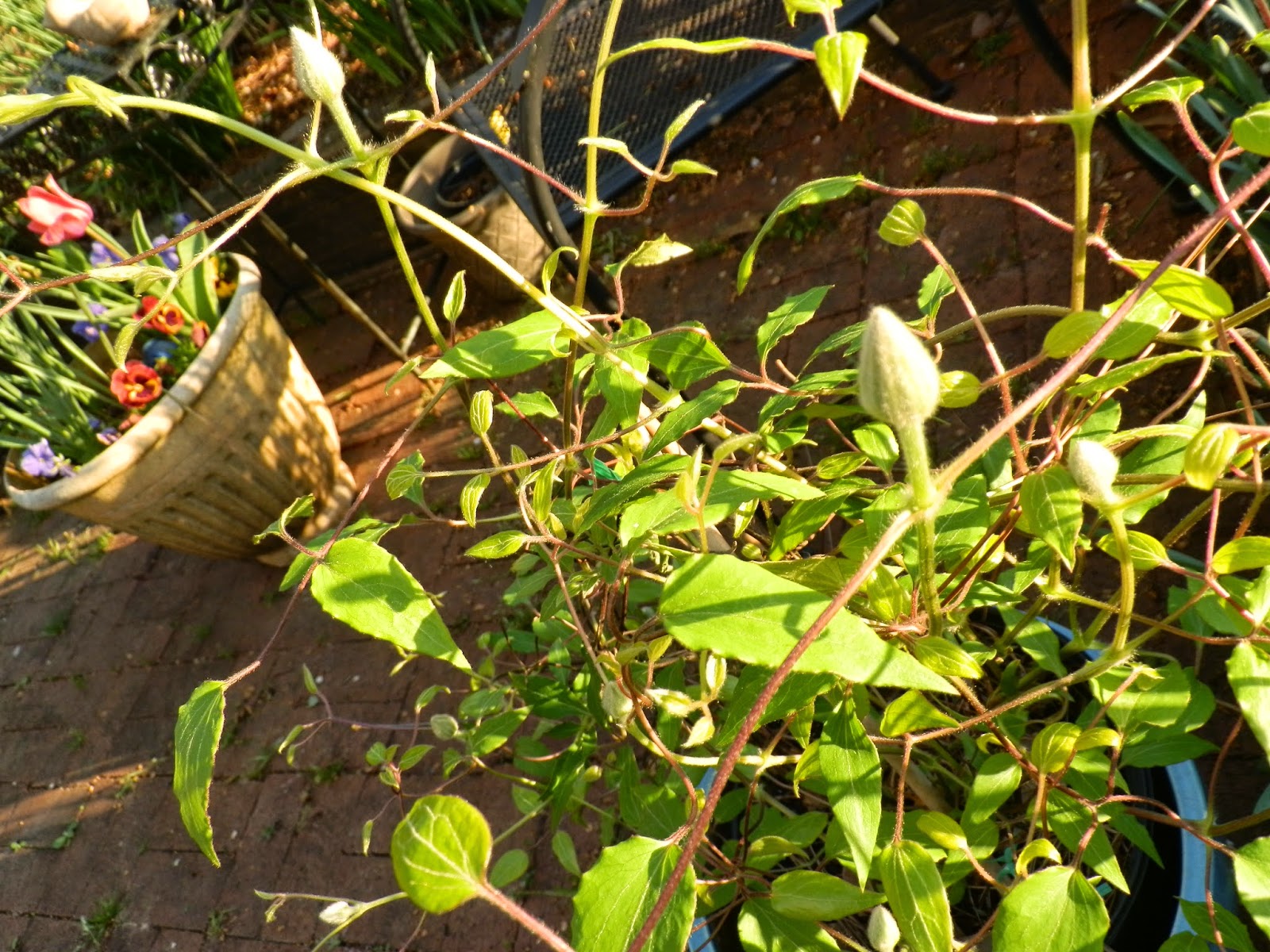 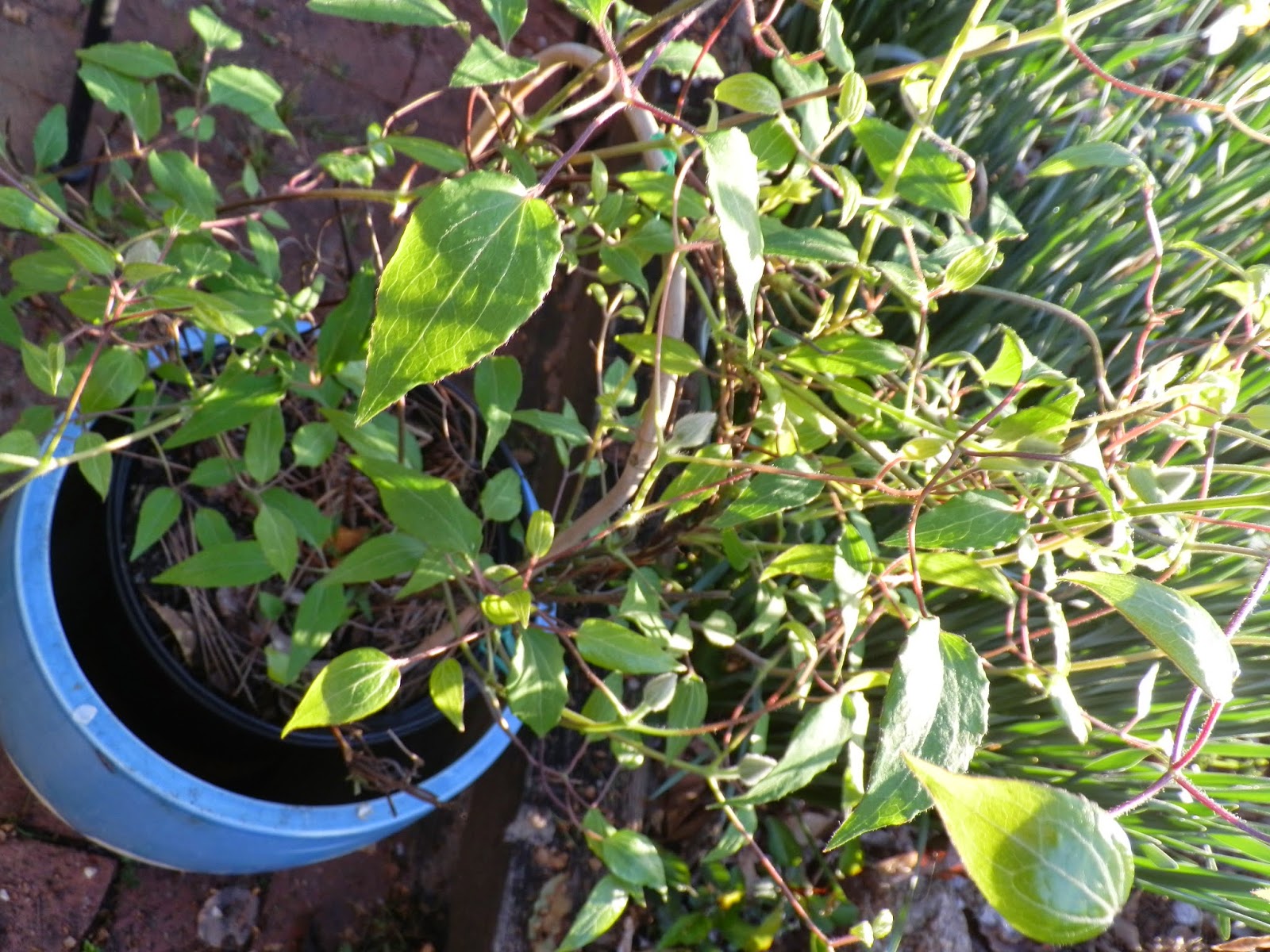 My son gave it to me for mother’s day last year. I’m not enough of a gardener to know what kind of clematis this is, or what I might have expected from it, because these plants vary greatly in their performance. But I do know, that this one not only made it through a long, cold, winter, but is about to burst forth in glory.


“The servant grew up before God—a scrawny seedling, a scrubby plant in a parched field. There was nothing attractive about him, nothing to cause us to take a second look. He was looked down on and passed over, a man who suffered, who knew pain firsthand (Isaiah 53:2-3 The Message).


It’s sometimes easy to forget with all the glory of Easter, that the Savior was seemingly like my clematis plant, just another weed, ready for the mulch pile.


“One look at him and people turned away.  We looked down on him, thought he was scum. But the fact is, it was our pains he carried— our disfigurements, all the things wrong with us. We thought he brought it on himself, that God was punishing him for his own failures. But it was our sins that did that to him, that ripped and tore and crushed him—our sins! (Isaiah 53:3-5 The Message).”


It turns out, we are the ones ready for the mulch pile, not him.  In our turned over lives, God is pulling us from the clutches of all that would squeeze the life out of us. Jesus was the way He was, because we are the way we are. He was a target of scorn because of our sins.


“He took the punishment, and that made us whole. Through his bruises, we get healed. . . We’ve all done our own thing, gone our own way. And God has piled all our sins, everything we’ve done wrong, on him, on him” (Isaiah 53:5-6 The Message).


In the end, Jesus did pay it all to ransom our weed-infested souls, taking our punishment, pulling us from dark deaths, and dirty ditches, and destitute destinies.


“He was beaten, he was tortured, but he didn’t say a word. Like a lamb taken to be slaughtered and like a sheep being sheared, he took it all in silence. Justice miscarried . . . He died without a thought for his own welfare, beaten bloody for the sins of my people. They buried him with the wicked . . . even though he’d never hurt a soul or said one word that wasn’t true” (Isaiah 53:7-9).


We are the guilty ones, and we would have protested trying to save our own skin, “It’s not my fault. I didn’t do it.” But He offered not one defense on His own behalf.


“Still, it’s what God had in mind all along, to crush him with pain. The plan was that he give himself as an offering for sin so that he’d see life come from it—life, life, and more life. And God’s plan will deeply prosper through him (Isaiah 53:10 The Message).


It is what God had in mind. Incomprehensively, he gave His most precious to suffer inestimable pain, all on our behalf.


And all this glory going on and on.

A beautiful and inspiring post. Thank you so much for sharing.