Paris, the city of light, and The Light

I’ve spent so very much time in Paris.


I journeyed there often during the four years I spent in Lida Sim’s high school French classes. I bought a scarf in a shop along the Champs-Élysées, gaped at the Arc de Triomphe, checked out a book from the bibliothèque, and stared slack-jawed at masterpieces of the Louvre. 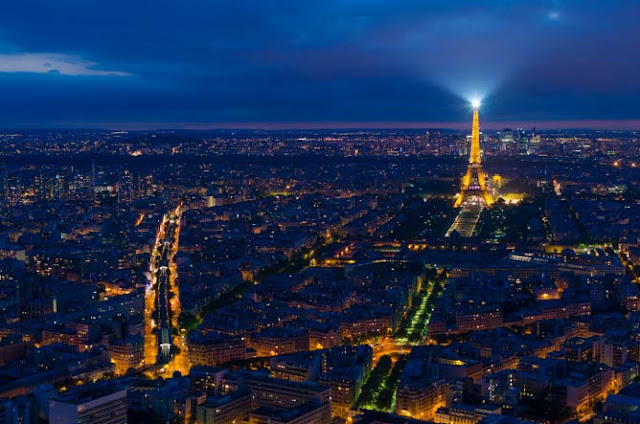 
I’ve had amazing companions on my travels to Paris. I’ve accompanied Lucy when Ricky toured Europe with his band, found myself as Audrey Hepburn did  in Sabrena, and oh, when Gene Kelley danced along the banks of the Seine with Leslie Caron in American in Paris, I was so there. So very much there.


But, maybe the first time I went to Paris, I went to mourn. As a little girl living in the suburbs of Atlanta during the sixties, I still remember the newspaper headlines in Atlanta papers, when an Air France plane crashed at Orly, in which 106 Atlanta art patrons died. The memorials from their deaths eventually led to the building of Atlanta’s glorious High Museum of art. Years later, at the opening of the High, I saw the casting of Auguste Rodin's The Shade, presented by the French government to Atlanta, memorializing those who died at Orly.


More recently, I’ve visited Paris through moving stories told by friends who have traversed its avenues on mission trips and birthday celebrations.


Well, maybe, I’ve never actually stood on French soil. The closest I’ve actually been physically was when I leaned hard across the English channel and gazed longingly over the divide. The truth is my travels have been vicariously lived through other’s stories or in my own imagination.


For many of us Americans, though, there is a corner of our heart where the Eiffle tower stands, and we feel a sense of belonging in the City of Light’s glow.


At our house, even our name and heritage largely points to the mother country and Parisian streets as the Americanized Varnado was originally spelled in the French, Varnadeaux. My husband has older relatives in Louisiana, who only spoke French until they entered school.


So, you see, last week, when the heart of evil stormed music venues, soccer stadiums, and cafes killing 129 and wounding over 300 others, our hearts broke as if it had happened in our own streets.


Just after 911, a woman, a complete stranger, held a door open for me in an Old Navy store. Our eyes met, and I thought for a moment, we might fall into each other’s arms crying. I have felt much the same way in the past few days.


As I hum “La Marseillaise ” under my breath, I pray for France―for her people, her leaders, the families of the victims.


In the aftermath of this tragedy, I pray for a move of God’s spirit throughout her land, that Paris would be a city of light which transcends the radiance of street lamps, where the true Light penetrates the hearts of all who live there.


And I pray that our mighty God might arrest this evil that stalks her streets.

Posted by Beverly Varnado at 10:32 AM