I help my husband write and edit his football memory blog, One Old Dawg, and try to keep my voice as simply background over there. But something football related has been stirring in my heart and I felt compelled to speak it, so if not over there, then here. 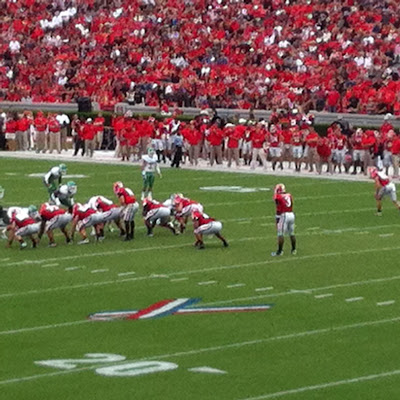 In our community we’ve been dealing with the loss of a man who has literally changed the culture of football here at the University of Georgia, our beloved head coach Mark Richt. A strong Christian, Richt is known nationally for his integrity both on and off the field. When we first found out about his dismissal, we were stunned. This is not just about football, but about his influence for good in so many arenas. Seems like he’s now taking that influence to southern shores, his alma mater at the University of Miami. The “U” is going to be blessed beyond their imagination.


In the days after Richt’s firing, we received a report written by Scout National Recruiting Analyst, Chad Simmons about Richt’s meeting with the team when he informed them he wouldn’t be coaching the bowl game. Richt told them he would always be there for them, and concluded by saying, “Life is about people, not rings . . . Rings collect dust.”


Mark Richt has been criticized for not winning an SEC championship in the last few years and therefore not gaining that coveted championship ring. But his investment in his players, this community, and this state is one that far outweighs any piece of jewelry.


Ever since I read this report, I can’t stop thinking about what I’ve seen play out at our house.


My husband, Jerry, used to have a ring. And watches, too.


He had a Sportsmanship Award watch given to him in high school when he played football for the legendary coach and three-time national high school football championship winner, Wright Bazemore.


The watch was stolen.


Jerry also had a solid gold Rolex watch embellished with a cotton boll from his Cotton Bowl championship when he played football for the University of Georgia.


Just after he became a pastor, someone broke into the parsonage and robbed him of it.


He was given a Southeastern Conference Championship ring when the 1966 team for which he played defensive end won the SEC championship. Beautiful. Gold with a ruby.


It was stolen, too. Twice. Recovered once, but the second time, it was probably melted down, or fell into the collection of some unscrupulous collector never to be seen again.


But my husband has things that cannot be stolen, stored in a place where thieves cannot break in and steal.


In the years since my husband left his law practice for the ministry, there have been hundreds, perhaps thousands of lives surrendered to Jesus during years of prison ministry. Hundreds more in church services and special events through the years.


There are thirty years of sermons preached to uplift and encourage the church, Bible studies taught, hospital chaplaincy calls made, nursing homes visited, weddings and funerals conducted, international mission trips traveled . . . I could go on. Really, God only knows the scope of all of this.


I’m not saying these things just to brag on my husband. But folks, he had a ring. But before his ring even had a chance to collect much dust, it was stolen.


It would be a mistake to say we wouldn’t like to have those things back. We would, to show children and grandchildren.  But again, life is not about rings.


When we’re tempted to put trophies ahead of the lives we touch, let’s remember that in this life it can all go away. And so very quickly. But if we store up our riches in eternity, we’ll have them forever.


Mark Richt is a man who understands that.


So does my husband, Jerry.


We’re going to miss Coach Mark Richt. He has left an indelible mark on this University community, but we take comfort in the knowledge that he will be wielding his Godly influence in a new arena and changing lives there.


“Don’t hoard treasure down here where it gets eaten by moths and corroded by rust or—worse—stolen by burglars. Stockpile treasure in heaven, where it’s safe from moth and rust and burglars. It’s obvious, isn’t it? The place where your treasure is, is the place you will most want to be, and end up being. “(Matthew 6:19-21 The Message).

For your Christmas list, please consider fine art prints or notecards from my Etsy Shop, Beverly Varnado Art or my books Home to Currahee or Give My Love to the Chestnut Trees.

An excellent piece about the impact and true influence of Mark Richt.

Alan, thanks so much. Means a lot coming from you. Blessings, Bev