For climbers headed up the steep cliff

The loss of my Aunt Nell last week brought to mind a couple of things.


First, I love this tattered photo of her holding on to her younger sister, my mother. It's the only picture we have of our mother as a small child. 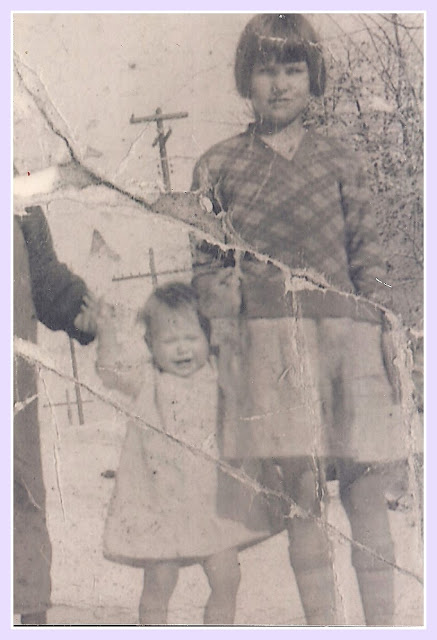 These two are once more walking hand in hand.


And I remembered these words from Streams in the Desert:


“This mountain climbing is serious business, but glorious. It takes strength and steady step to find the summits. The outlook widens with the altitude. If anyone among us has found anything worthwhile, we ought to ‘call back.’”


It seems in the past year, more than at any other time of my life, I’ve been losing those folks who’ve been pillars in my life. I suppose if we live a while on this planet, it is an inevitable course of events, but still unsettling and hard.


A few days ago in the wee hours of the morning, I had a dream in which someone came to me and told me my Aunt Nell had died―that woman who had been such an encourager to me. I awoke crying and wishing I could roll back the clock to those years before the dementia had taken hold of her brain, and I could have one more conversation with her.


Of course, I found out a couple of hours later that she had indeed died. I wrote about her HERE.


After the funeral, the family gave away copies of a little book she’d written about her life. After she received her GED at 81, she learned how to use a computer and began writing.  Anyway, blessedly, no one had edited the book in anyway. When I read it, I felt God had answered my prayer, that I was getting to have a conversation with her. I was surprised to see she had included a piece in the collection that I wrote about my mother, which we gave away at my mother’s memorial. You can read it HERE. Repeatedly, my Aunt Nell “called back” to me words of encouragement in that unique dialect characteristic of those who grew up in the rural foothills of the Blue Ridge Mountains.


After having a serious heart attack in the late sixties, she was not expected to live much longer. But God had other plans. She writes, “The first time I went to church, Brother Smith said he saw a light over my head. The Lord told him I was going to be healed . . . I went from 1969 to 1992 before I had any more trouble. The Lord kept me alive because He is not through with me. I call people and ask them if they are saved, I pray for them, and I taught Sunday School for twenty seven years . . . I never get tired of serving Jesus . . . “


And so in her eighties, she wrote, “I know I have failed Him so many times, but He loves me still. I don’t know what the future holds for me here on this earth, but I know who holds my hands. He is my Master. He is my King. He is my Savior, my all and all.” Then she invites all who read her words to consider giving their lives to the Lord, too.


She had gained the summit and she wanted those coming behind her to find the heights as well.


When I read her words, she helped me realize the value of my own writing―not because I am the greatest writer in the world, but because it is MY writing, MY testimony. If those who follow me want to have a conversation with me, I am calling back to them through my writing. I have written my thoughts on hundreds of subjects. It is part of my legacy for those who follow.  If they wonder how they will make it when the pillars in their life have been removed, here I am saying, by the grace of God, you can, because God is giving me that grace right now to keep moving ahead. To keep making plans.


I want to be like my Aunt Nell who never, ever gave up on her dreams and kept mentoring others in the faith until she could no longer string the words together. Then she inspired simply through her being.


Like her, I want my work to be eternal. I want my life to matter. Sometimes the climb is so steep, and the learning curve so serious, I feel I might fall backwards off the cliff, but I hear her and others calling, “Hang on, it’s all worth it.”


There are pictures to paint, and music to play, and books to write and others to teach, and as long as I can, just like my aunt, I will “call back.”


So for all you folks just like me who are headed up the steep cliff of life, hey, we’re going to make it.


We are and as we do, we will “call back” to those coming after us that they can make it too.


“Do you see what this means—all these pioneers who blazed the way, all these veterans cheering us on? It means we’d better get on with it. Strip down, start running—and never quit! No extra spiritual fat, no parasitic sins. Keep your eyes on Jesus, who both began and finished this race we’re in” (Hebrews 12:1-3).

Posted by Beverly Varnado at 9:54 AM

Beautifully said Beverly. Aunt Nell had that effect on all of us that encountered her ever so infrequently during our lives. You could never come away from being with her without an impact on your life and memory. My mother, Ruby was a child of Jewell, your mom"s sister.

Oh, I remember Ruby well. I always loved her name. Ruby, the daughter of Jewel seems so poetic to me. Thank you for sharing this memory with me. I suppose only heaven will tell the full effect of Nell's life. Love to you and yours.

Beverly,
Thank you so much for sharing such beautiful words and thoughts. Pray that you and your family are well. Take care....hugs & love!

Mae, it blessed me so to see your name pop up here. Thank you, my friend, for reading. Love to you and yours.