When the circle becomes complete 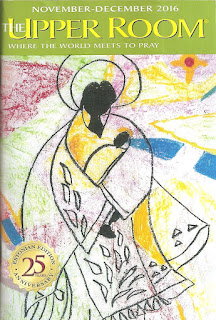 According to the Upper Room Magazine website, since 1935, the publication has “sparked a global ministry that now reaches millions around the world in 100 countries in 35 languages.”


I have a personal story about its effect.
One September evening while in my mid-twenties, I had reached the end of my wandering in a far country. My rebellion against God centered around the idea that I didn’t want God to take away my happiness. But I had come to the realization that I didn’t have any happiness for God to take away. In fact, I was beyond miserable.


C.S. Lewis, whose writing would be foundational for me, says, “God stoops to conquer.”


He certainly did that evening for me.


I bowed my head and surrendered the broken pieces of my life to God. I had so little understanding of God’s ways, I didn’t even know if He could or would forgive me, but I asked and declared if there was anything left of my life He could use, it was His.


The next morning, I happened to find an Upper Room Magazine in my apartment, and I began to read it. It seemed God spoke directly into my situation.


That was more than thirty-five years ago. Today I am a pastor’s wife, a writer, a speaker, and all of this is because that September night, God did forgive me, and gave me a ministry beyond anything I might have imagined. The Upper Room Magazine has continued to be a daily component of my time with God.


I have written for other publications, and have books in print, but nothing I write means more to me than the devotions I have written for the Upper Room Magazine because of its significance to me. I love that around the world God can perhaps use the words I have surrendered to him in the same way He used the magazine in my life.


Once more this month, I have a devotion in the periodical. It will appear on December 12 (You might try a sneek peek here). I’ll also be writing for their blog that day and I understand  I have pictures appearing in their ezine, as well. I’ll post the links here as they become available.


I don’t believe finding the magazine in my apartment all those years ago was an accident. God saw my future, and knew He’d bring me full circle.


For that, I am so grateful.

Posted by Beverly Varnado at 9:26 AM