My Mom and Rutabagas

This may be the strangest Mother’s Day post ever.


However, while waiting for my food to be prepared at a Southern style restaurant, I knew I had to write it.
When the server placed my plate on the table, I took in the cubed umber-tinged vegetable and breathed deeply its distinctive aroma.
Rutabagas.


You may not even know what they are.


The absolute wall flower of vegetables, a cross between a cabbage and a turnip, in some European countries it is considered a “food of last resort . . .  due to its association with food shortages in World War I and World War II.”


My mother knew about foods of last resort having grown up in the heart of the Depression. However, those foods of last resort often became comfort foods as people grew older. Well, everyone except my dad, who, until the day he died called English peas “little green devils” having had his fill of them during hard times.


When I entered middle school, my mother, for various reasons returned to a job she had earlier in life. In our town, women were mostly teachers or nurses, and if unskilled, worked in the textile industry, the largest employer in our town. For many years, she worked what my husband calls “shift work” leaving home mid afternoon and not returning until near midnight. This meant that during the week, I never saw her. I left for school before she rose, and returned after she left.


But, she would sometimes leave dinner on the stove for us, and in the winter, that food might often include rutabagas. Now, I need to tell you that rutabagas are an acquired taste. You won’t eat them the first time and say, “Wow, those things are yummy.” No, it might take a few tries before your taste buds acclimate to the slightly bitter taste. It might have taken me a few dozen tries, but eventually, I came to love them.


After my mother died, my rutabaga consumption went to zero as they never appeared on a menu anywhere.


Of course, they can be found in the homely vegetable section at the grocery store, but unless you have a power saw, you won’t be able to do anything with these root veggies. 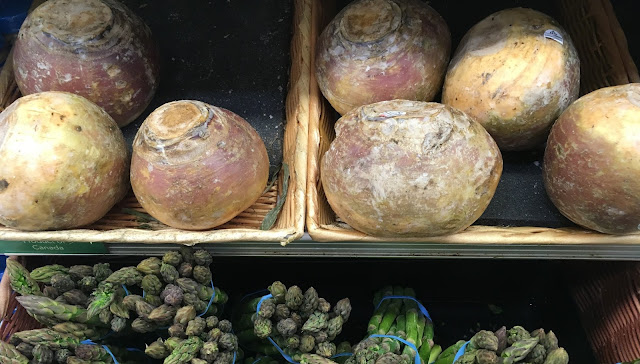 
So, when I saw them listed on the menu board at a place called Rachel’s, my heart did a flip.


“Rutabagas,” I squealed to my husband.


He peered at me in that way that says, “Have you had a stroke?”


“My mother used to cook them,” I said defensively.


Whenever we visit Rachel’s, my ordering never varies and always includes rutabagas. I eat and think of my mother.


Long ago, my sister and I walked into a dark, lonely house after school, but the scent of rutabagas hung in the air telling us mom had been there and that she loved us.


The scent of them says the same thing to me, today. Psychologists tell us the sense of smell, "more than any other sense, is so successful at triggering emotions and memories." Rutabagas and I are proof of that.


I read a post by a friend on Facebook this week, and in it, she honored the passing of a dear Christian friend. She concluded the post in such a poignant way. “See you at the house,” she said.


My mother has been gone many years, but to her I would say, “I still love and miss you, Mom, but I’ll see you at the house.”


And if I know her, she’ll probably have rutabagas on the stove.
"There is plenty of room for you in my Father's home. If that weren't so, would I have told you that I'm on my way to get a room ready for you? And if I'm on my way to get your room ready, I'll come back and get you so you can live where I live" (John 14:2-3 The Message)

Posted by Beverly Varnado at 9:11 AM

Boochie, my Daddy's mother, took me to the original Len Berg's in the alley in Macon and ordered rutabagas, which as a six year old, I had never heard of before. Thanks, Boochie, for my early education!

So much love in this post, and I can't believe I've never tried rutabagas. I like every veggie except English peas. Collards, turnip greens, beets--everything. So I bet I'd like these too!!

I think I would have loved your grandmother. Glad she helped educate your palate. Lov, Bev

I think you would with the right seasoning. Worth a try. Many thanks and have a wonderful Mother's Day yourself!!!