22 days and when you're looking for restoration

“So, have you written about it?” my friend Connie asked me Friday night at the after party for VBS.


I wiped down a table as I shook my head. “I just couldn’t write about one more sad thing.”


For twenty-two days, my Mama Kitty had been missing. She disappeared the week when so many tragic things were transpiring.


This feral kitten showed up seven Decembers ago in our back yard at the same time I was dealing with another painful situation that seemed irresolvable. I couldn’t change that situation, but I could try to save this little kitten that faced temperatures in the single digits. I couldn’t catch her, but I built her an insulated homeless shelter with a warming disc in it. She made it and I eventually was able to tame her, but not before she had four kittens, about which I wrote many stories.


The feral still apparent in her, she wouldn’t stay inside all the time, and literally climbed the walls wanting to get out. My vet told me both Mama Kitty and I would be miserable if I didn’t open the door. She might be gone a day or two but always returned.


After her disappearance, I called for three weeks every morning and night, listening, listening. Only crickets answered. There would be no reason to put out flyers. She’s so stealth, no one would see her grey body as she only moves at night, and if they did, they wouldn’t be able to catch her.


Jerry tried to console me by saying if cats taught survival lessons, Mama Kitty would have been the lead instructor. I tried to take comfort in that thought as well as the truth that God knows when even a sparrow falls to the ground.


I would have normally cried my eyes out about her, but with all the profoundly sad events, I put my grief in a box and sat on it. There was just too much going on. I didn’t think I would ever write this story.


But my little friend McCoy who loves my cats found out about her disappearance. Sunday a week ago, he came up to me, “Let’s make a prayer for Mama Kitty,” he said then bowed his sweet head. “Oh Holy God, please send Mama Kitty back.”


I have to admit McCoy seemed to have more faith than I did.


Friday night, we got home late.


Jerry got out of the car first. “I hear something,” he said. I jumped from the car. I heard it too. Faint mewing. “Mama,” I called. She called back to me with a louder mew. I followed it to a dogwood tree in the front yard where she had often waited for me to get her. She came down into my arms.


I held her close and took her inside. When I put her down at the food bowls, she had lost so much weight her sides nearly touched, and she had red clay dust all over her.


But she was back.


Mama Kitty was back. Then the tears finally came.

I couldn’t help but think of a word we studied at VBS this week. 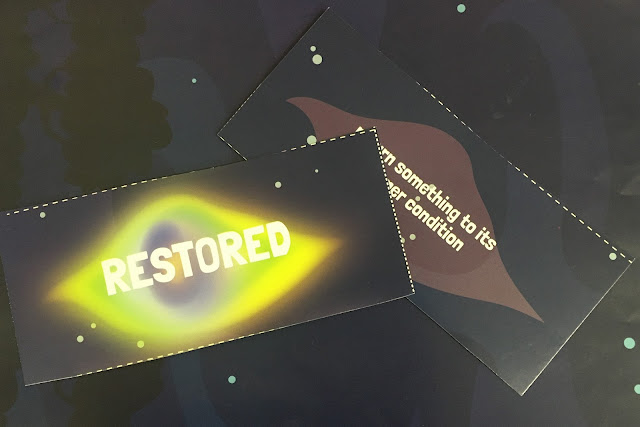 Restored―return something to its former condition.


The Varnado animal kingdom has been restored. All members present and accounted for.


The sense I had Friday night of things being set right was so wonderful.


In a much, much larger sense, Jesus came to restore.


We sang a song this week at VBS, which told this story. I have it on replay and probably will for sometime―How Far Love Goes.


He can restore me.


He can restore you.


He can set things right.


Oh, yes, there may be consequences of sin, but those will be bearable in the context of His amazing love and provision.


Yes, I am a big fan of the word restore.


At this writing, Mama Kitty has made no move toward exiting the house. I asked McCoy where he thought she had been all this time. He said He thought she may have tried to call me from a train station. Hmmm, on a train. Of course. Makes sense to me.

Stories about Mama and her kittens HERE.

Posted by Beverly Varnado at 10:33 AM

Ohhhhh, hallelujah! She's home! Restored is such a beautiful word.

Bev, as always, you inspire me with the beautiful way in which you weave God's presence through every situation. So thankful your sweet kitty is home. Praying for you in this difficult season.
Much love,
Beth

Yes, hallelujah. Thank you, Lord. I just told my husband I don't have to go to bed sad because Mama is now home!!!

Appreciate your prayers so much, Beth!!