What can happen after a flood

I awoke in the middle of the night to see lights flashing across my bedroom walls and voices sounding nearby. I went outside where a law enforcement official stood in the street reversing the flow of traffic in front of my apartment building.


I pulled my bathrobe tighter around me. “What’s happened?” I asked.


“A dam broke at Toccoa Falls.”


I had the distinct impressions he was lying to me.
But I wonder if he was even aware of the scope of what had gone on just a few hundred yards beyond us. 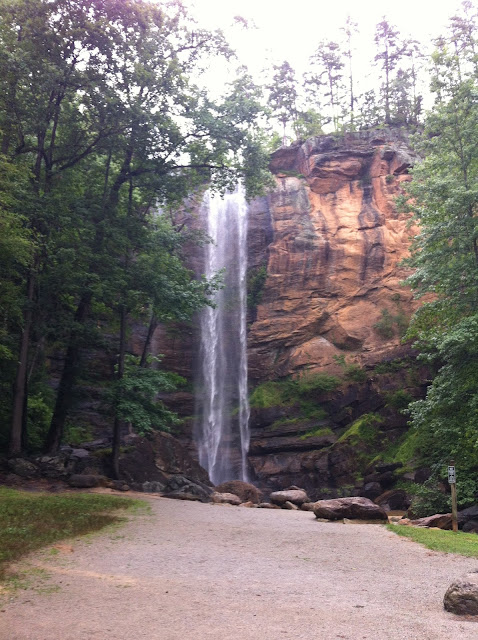 The details emerged the next day. After days of rain, and without warning, an earthen dam broke above Toccoa Falls Bible College sending twenty seven million cubic feet of water plunging over a 186-foot waterfall creating a wall of water that killed thirty-nine people. It destroyed nine houses, eighteen house trailers and two college buildings with whole families swept away―almost half of those who died under sixteen years old. Students, professors, other college staff, and their families were gone. There had been no time to escape.


The grief in our community was palpable.


My dad, a banker, also volunteered with the Civil Air Patrol and was out in the next days as part of the search and recovery effort. I still remember his face when he told me his team had recovered one of the victims.


The flood occurred between our town and the water supply, so when one of the main lines was damaged from the force of the flood, we were without water for weeks. The Coca Cola Company trucked in big pallets of water in Coke syrup cartons. I still remember how glad I was for those cartons. On the far side of town, folks were less affected and I showered at various family members’ homes. But all of that trouble was nothing compared to the heartache of those who were burying their entire families.


How would the little college go on? The tragedy was so overwhelming and it seemed to me at the time this might put them under.


Out of the heartache, the mud, and the devastation, the college rose up and today, many years later, continues to educate and prepare pastors, teachers, missionaries, and others who serve in secular jobs. According to their website, “Graduates serve in places of Christian leadership throughout the United States and most nations of the world.”  Among them, a singer songwriter whose songs you may have known for years―Dove award winner, Aaron Shust.


Shust’s song Cornerstone seems appropriate now, because when the floodwaters rise and everything else has given way, whether literally or figuratively, it is good to know one Cornerstone remains steady.
(If video fails to download in email, HERE please.)


Houston makes me remember this flood of long ago, for though I wasn’t in it, I inhaled the air that surrounded it. Even as I wrote this, I felt a bit shaky. But in remembering the flood, I also remember the mighty things that happened afterward. So for you folks in Houston who are standing in line for water, carrying debris out of your homes, and sloshing through the mud, our prayers and I pray, our support is with you. For those who have lost loved ones, oh, how our hearts grieve, too. We pray His comfort for you.


After the flood, we ask that God will rise up in the midst of your suffering to do something He alone can do and that Jesus would truly be your Cornerstone.


“. . . you are . . . fellow citizens with God’s people and also members of his household built on the foundation of the apostles and prophets, with Christ Jesus himself as the chief cornerstone” (Ephesians 2:19-20).


Again, Samaritan’s Purse is asking for volunteers and donations. Contact them HERE.

And for those of you who may not have seen my Facebook post or my update on last weeks post, our friend T in Asia made it through customs in her words "unseen and unquestioned." Truly a miracle. Thank you for praying. She is now back with her 16 kids.

Posted by Beverly Varnado at 8:39 AM