Lots of fun around here with family and finding time to work on edits for three different book projects, so I needed to pull something from the archives for this week's post. I loved writing this piece about an adventure my daughter and I had.


Growing up in the Deep South as I did, ice-skating seemed the stuff of fairy tales.


The closest we came to it was sliding across the driveway after an ice storm.


But in the 1976 Olympics, Dorothy Hamill perpetuated the fairy tale. In graceful splendor, she sailed across the ice and into our hearts with an Olympic Gold medal in both the short and long programs.


We wanted to spin like Dorothy. We wanted her haircut.


She planted in the heart of a young woman more experienced at swimming than spinning an aspiration to don a glittery costume and perfect an arabesque while gliding across the ice on two blades at twenty miles per hour.


Well, take away the glittery costume, the arabesque, and the twenty miles an hour, but I finally did it. 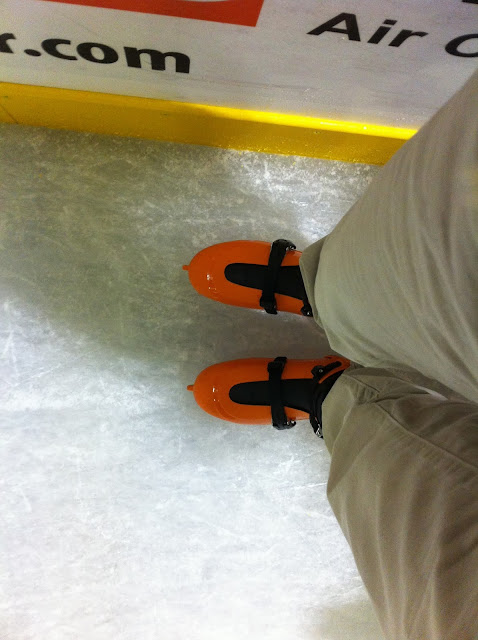 Unable to find ice thicker than the skim on the birdbath around here for decades, an ice skating rink finally came  to my town, and I strapped on a pair of blades.

When I first stepped on the ice, I said to my daughter who was with me, “I’ll never get this.”


She turned to me and said, “I felt the same way when I first did it.” She’d ice skated in the city where she attends college and had at least a working knowledge of what to do.


I clutched the rail as I inched my way around the rink. In short order, my daughter struck out on to the ice leaving me trying to avoid the flailing arms and legs of those in front and behind me. Halfway around, I arrived at a few conclusions.


First, this creeping along was not ice-skating.


Second, I was in more danger at the rail than on the ice, with the bladed feet around me splaying in every direction.


Third, I was never going to learn anything white knuckling the rail.


So, contrary to my careful nature, I let go.


Just the blades, the ice, and me. Oh, and the toddlers, the teenagers, and the retirees flying past as if I were standing still.


With every move, I saw myself Dorothy, elegant and agile. I wanted to do tricks—skate backwards, do a triple jump, something. But I suppose my biggest trick was managing to stay upright on the ice without splatting on my hiney.


I don’t believe in bucket lists, but I do believe in living our whole lives well and for me, putting on those ice skates was a dream come true.


So glad I turned loose of that rail.


Looking towards a new year, I suppose there are other ways that I’m metaphorically holding on to the rail. But I’m looking to let go in those areas as well—to unfurl my fingers and glide into the future with Jesus.


Oswald Chambers said it this way, “As we go forth into the coming year, let it not be in the haste of impetuous, unremembering delight, nor with the flight of impulsive thoughtlessness, but with the patient power of knowing that the God of Israel will go before us. Our yesterdays present irreparable things to us; it is true that we have lost opportunities which will never return, but God can transform this destructive anxiety into a constructive thoughtfulness for the future. Let the past sleep, but let it sleep on the bosom of Christ. Leave the Irreparable Past in His hands, and step out into the Irresistible Future with Him.”


Maybe you have white knuckles, too, clutching onto the familiar, holding onto the past, when God is calling you to step out with Him. It’s scary. It’s unpredictable. And it may not be all that safe.


But this southern gal is here to tell you, there’s nothing like it.


Let go that rail and have a blessed New Year!


Posted by Beverly Varnado at 5:01 PM

Email ThisBlogThis!Share to TwitterShare to FacebookShare to Pinterest
Labels: courage, Isaiah 41:13, My Utmost for His Highest, New Year, Oswald Chambers

I'm not a very good ice skater (being Southern and everything) but I'm pretty good on roller skates! I loved Dorothy H too!

Love how you brought Oswald Chambers in.

Thrilled for you about your books!