My new one looks exactly like last year’s. They’re both red with hardback covers, but of course, my new one is pristine and doesn’t have old church bulletins stuck in it, post-its lining its cover, or highlighter markings leaping off every page. Years ago, I became fixed on one kind of calendar for a number of reasons. I like a monthly calendar because I can see at a glance the big picture of how life is going to go. This one is thin, easy to store and offers a number of blank pages in the back, which I use for keeping up with my daily writing word count, goal setting, and many other things. I often refer back to calendars of previous years to check notes.


I know what you’re thinking. Why don’t I keep my calendar on line and sync it with all my devices?


I’ve been on a ninety-degree learning curve for as long as I can remember. Please let me keep my paper calendar. At least I don’t still use a typewriter.


I found this perpetual calendar at an estate sale. The days may be changed to accommodate any month or year. 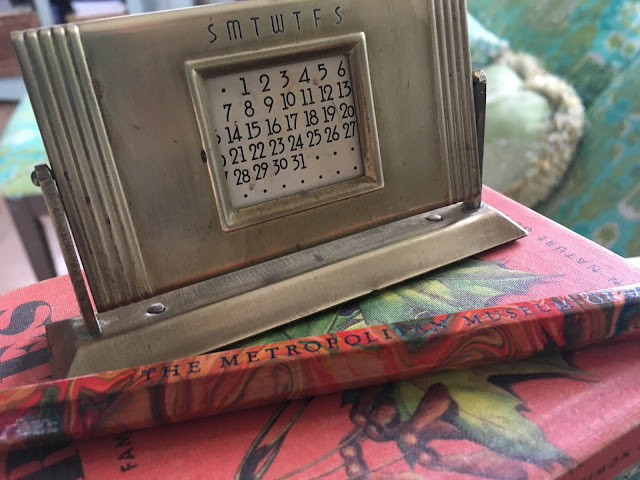 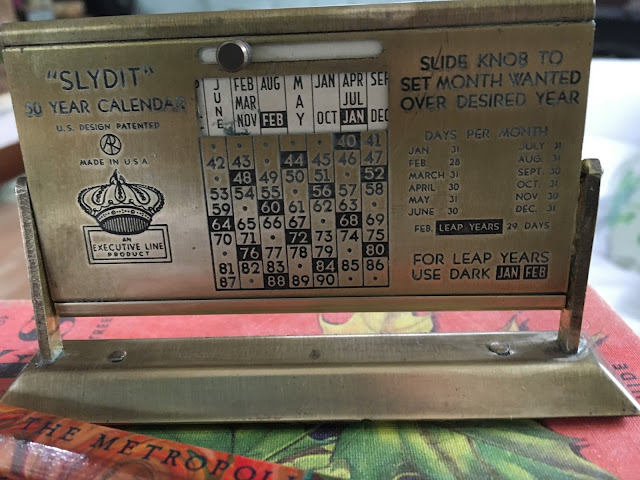 It appears to be have been an advertising calendar because it has a shipping supply company from Kansas City stamped on its base. As you can see, the first year that appears on it is 1940.


In 1940, WWII was raging around the globe as both Brussels and Paris fell to German forces. Food rationing began in England as they prepared for German attack. Thankfully, Winston Churchill became prime minister of Britain in May.


Here in America, the first McDonald’s opened in California, and Walt Disney released his second animated film, Pinocchio. Even though the U.S. had maintained an isolationist stance, the rumblings of war cause President Roosevelt to create the first peacetime draft in U.S. history.


As I scan the calendar that begins years before I was born, I remember the hand of God in our corporate as well as personal histories. Winston Churchill would be instrumental in helping the Allies win the war, and the draft Roosevelt enacted would be crucial when Pearl Harbor was bombed the next year.


As I hold my new calendar in my hand looking forward to what God might do in the year ahead, and setting personal goals, I also look at my old calendar and give thanks that “hither by Thy help I’m come.”


I don’t imagine the first owner of the perpetual calendar ever dreamed I would have it on my desk and still be using it in 2018.


But I am, and perhaps yet another generation will also find it useful. Like the new one, this  old calendar also offers me a picture of how life is going to go . . . that no matter what happens, God will be with me in the future as He has been in the past.


So, friends, as you enter a new year, enjoy your new calendars, but also remember though calendars are for planning, they’re also for remembering and giving thanks.


“Then Samuel took a stone and set it up between Mizpah and Shen. He named it Ebenezer, saying, “Thus far the Lord has helped us” (I Samuel 7:12).

Posted by Beverly Varnado at 8:20 AM