What the pain, the rash, and the dogwood have to do with each other


Turns out it was none of these things.


“Shingles,” the nurse said without hesitation. “But we’ll see what the doctor says.”


“Shingles,” the doctor said. She inspected the reddish-purple patches on my leg. “If you’d come earlier we could have helped you more.”


“But I thought shingles affected your torso.” I had pain around my side which again I thought came from my back, but the rash extended from my hip to my knee.


“Follows the nerve. You can have it anywhere.” She wrote out a prescription for an antiviral and a steroid cream, which helped with the blisters that developed later that day.


I started backtracking over the last couple of months. Folks talk about their plates being full, but in November, my plate began feeling like one of those cheap paper plates used at picnics. As responsibilities piled on, the plate started bending and I feared things would slide off.


I sensed the Holy Spirit’s nudging, reminding me of what He taught me during that year I had cancer. Just because the need is there doesn’t mean I’m the one responsible to meet it. I know this. I do.


Why oh, why did I think this time was an exception?


Somehow, I managed, but my body went into rebellion.


How much the overload has contributed, I don’t know, because I’m also taking a medicine that may have weakened my immune system. In any event, for the past week, I pulled the plug, for more than one reason. As long as I have the blisters, I am contagious for chicken pox to those who haven’t had them or are not immunized.


Going forward, I have to figure out how to minimize the pressure. That’s going to involve hearing from God and a two-letter word that no one wants to hear and is so very hard to say―NO. It means disappointing folks.


I read in an upcoming Sunday school lesson from a writer who shares she hadn't pruned a bunch of shoots from a dogwood tree, which meant, “Some of them were drying up and dying; others of them looked sickly and weak. They didn’t have a single aim; they were too distracted to grow; their strength was divided up. And I knew that for the sake of a strong future, that dogwood tree needed me to trim back its shoots.” 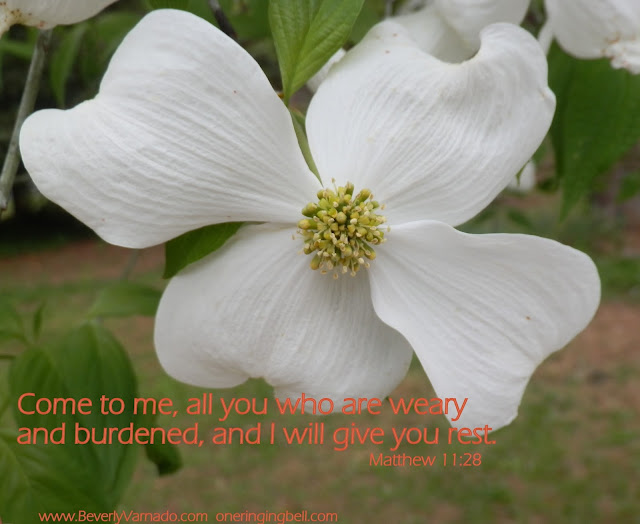 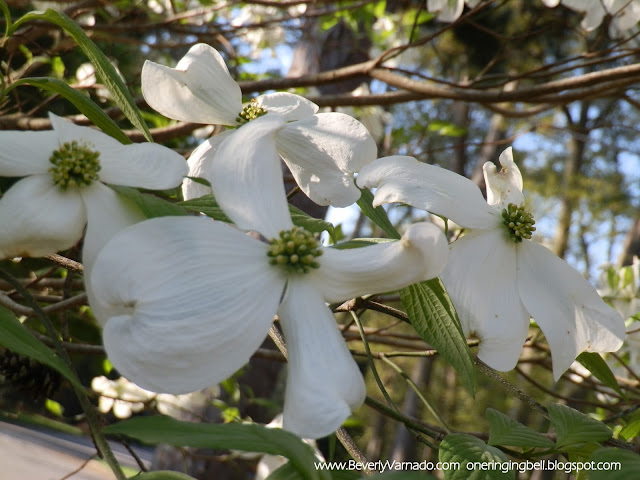 Well, just call me a cornus florida (dogwood) because that’s exactly what’s been happening to me. Too distracted and strength divided. To get strong again, I have to do some pruning.
Jesus says in Matthew 11:28, "Come to me all you who are weary and burdened, and I will give you rest."
When we come to Him with our heavy burdens, we hear what we need to let go of, and then as we do, we experience rest instead of that feeling we have of needing to keep all the balls in the air.


If you’re reading this, and it feels like you have too many shoots on your tree, take note. As Bible teacher Beth Moore says, “It’s always better to learn it in the classroom than on a field trip.”


Join me in getting out the pruning shears.
Posted by Beverly Varnado at 9:53 AM

Praying for your quick healing and recovery Beverly! Having experienced three bouts with shingles over the last two years after having received the vaccine; I definitely can empathize . Be very aware now and if you feel symptoms again get on the antiviral right away. It does make a big difference!

I'm so sorry about your shingles, and am praying for your recovery.
This post is an excellent reminder for many of us, so thank you!
Blessings, Patti Jo

Lilyan, Mary, and Patti Jo, thank you for your sweet words. I tried to comment when you posted but for some reason, the comments didn't show. Just know I did read them and thank you so much for taking the time to write. I am definitely on the mend. Thanks for the prayers!!