The gap, the quilt, and the lifted head

My little friend McCoy said it best. “Miss Beverly, you have a gap in your animals.”


A little over a week ago is when the gap happened.


It seems the older I get, the harder it is to lose these little creatures. I’m well aware that in the scheme of world events and other problems people we know are dealing with, it’s a small matter. With all that being said, I still grieve. This cat had come from my dad, so I think they may add to the sadness.


I sat at the vet one morning having already been told the day before things were not looking good. Now, they were super bad. I prayed, “God, I need something to help with this sadness I feel. Some way to redirect, something joyous to latch onto.” My head was down. Really down.


When I did, I noticed a quilt hanging high on the wall opposite me. Each quilt square had a different fish motif shaped into a bowl―around them several appliquéd cats and one dipped its paw into a fish bowl. 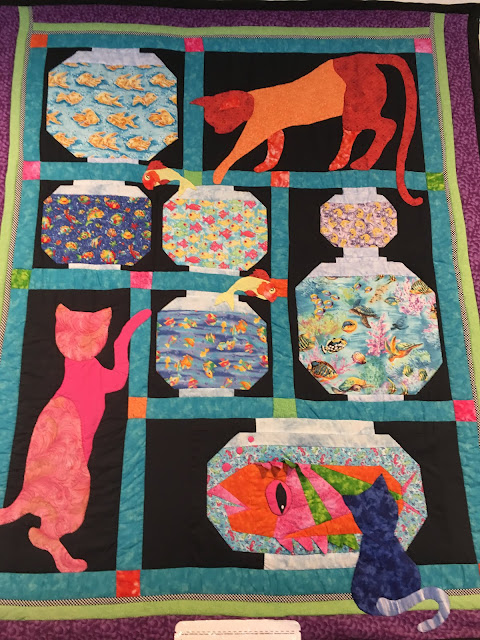 That’s when I thought of it―a favorite Isabelle story. My daughter was in high school when her older sister gave her a fish tank. She came home from school one afternoon and discovered a fish missing. It wasn’t floating, on the floor, or anywhere that we could find. Quite mysterious. A few days went by and the same thing happened again.

A short time later, we solved the mystery. I walked into my daughter’s room and caught Isabelle red-pawed. She had snatched the fish and eaten them leaving no trace of her crime and was about to do the same thing once more. My daughter’s fish bowl had become her own personal snack station.


In the middle of my tears at the vet’s office, I laughed.


Because I heard God saying, “Look up.”


When we’re going through stuff and our heads are down, God says, “Look up.” He’s right there to bring the consolation, healing, and hope we need to face the challenges before us. No matter where you are, or what’s going on, God has a way to lift your head even if he uses a fish quilt to do it.


I found a picture I had taken of Isabelle staring into the fish tank and decided to paint it this past week. In fact, I may enter it into an exhibit. Even though there’s a gap in my animals, Isabelle’s antics will live on. 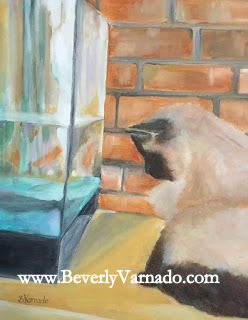 Remember Faith in the Fashion District is now available for presale at many online retailers.

“As a Ford model during the 1980’s, the New York fashion world was my world. Beverly’s encouraging stories of how God moved in that sphere help us realize that no matter where we are— even on Seventh Avenue—God wants to use us for His glory.”
Nancy Stafford
Actress (“Matlock”), Speaker, and Author

Posted by Beverly Varnado at 8:09 AM