With VBS this week and a book edit due on Wednesday, I'm pulling from the archives this week. It was about this time in the summer years ago when we set off for our family's big 7,000 mile cross country adventure in a borrowed RV. When I read the  posts about that trip again, I see the handprints of God all over our journey. I was just beginning to feel called by God to write and now this year, I have two books releasing. I stand in awe of all God did that summer in setting the course for our lives. We couldn’t have known at the outset that in just a few short weeks on September 11, our world would change forever, and that we were seeing this country through a lens in which it would never be seen again. We embarked with a joyous abandon and freedom, which would soon be challenged when four aeronautical spears pierced the heart of America.
In this post, we're dropping in as we reach South Dakota on our trip to Montana.World Radio asked us to record a segment about our trip for their Summer Vacations and Destinations series. You may listen to it HERE.
After several hours on the western side of the Missouri in South Dakota, I began to understand why people see mirages in the desert. I kept seeing one that looked like a Cracker Barrel.
Where were we going to stop, eat lunch, and stretch our legs? After miles of desolate sameness, we finally spotted some signs about an 1880’s replica town in Murdo.
“Let’s stop,” I said to Jerry.
“Probably a tourist trap,” he said.
I gave him my nonnegotiable look. He stopped.
Turned out to be a good idea, if I do say so myself. The kids played checkers while they drank their sodas, and Bethany dressed up as an 1880’s belle. The owners had gone to some lengths to make the place as authentic as possible and still have it be a fun attraction for kids. 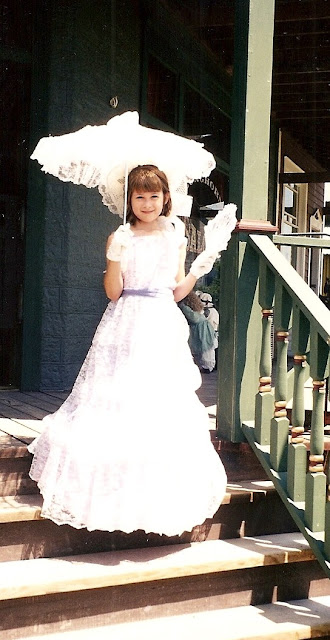 It was so much fun, we had a little trouble leaving, but we were close to the Badlands Entrance—a destination we had long anticipated.
Driving through the Badlands National Park is like driving on to another planet. The windswept terrain is unlike anything else on earth according to many who’ve circled the globe. The short loop through the park begins on I-90 and makes a forty mile circle back to Wall, South Dakota. There is a desolate beauty about the Badlands. But because of its unpredictable landscape, the French trappers and Native Dakota Americans found this part of the country a “bad land” to cross over. 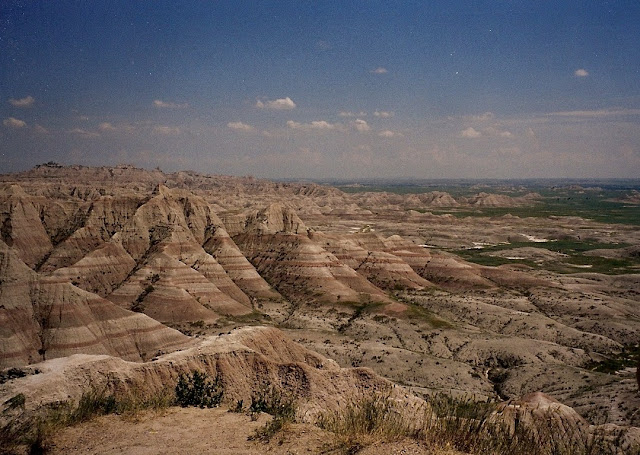 I eyed the gorgeous layers of sediment and rock banding the buttes. Out west, it was always tempting to do what Lucille Ball did in the movie, The Long, Long Trailer. She picked up a rock from every place she and Desi’s character went when they’d toured the country. Those rocks nearly sent their trailer plunging over a cliff when they crossed the Rockies. Aside from the similar danger of adding more weight to our already full van, I knew the National Park service would not be happy. We tried to leave as invisible a footprint as possible.

“Everybody put on your shoes, we’re getting out,” I said as I scanned the park service brochure. “We’re coming up to Journey Overlook.” 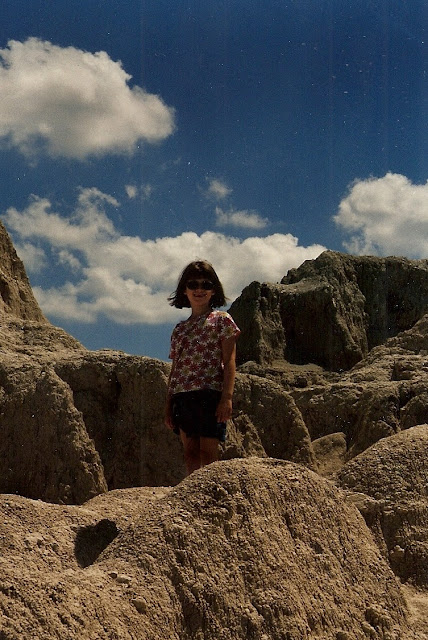 I turned around in my seat to see if the kids were ready and discovered Bethany had put on her flip-flops.
“Why do I have to put on shoes?” she cried clutching flip-flops to her feet.
I pointed to the rocks. “Look, you might slip trying to climb in flip-flops,” I explained. “This is for your own safety.”
“I won’t slip,” she said.
“Just put on the tennis shoes,” I insisted. Why were we always struggling over shoes?
A scowl spread across her face. She put them on, but she was not happy, and made no secret of it. 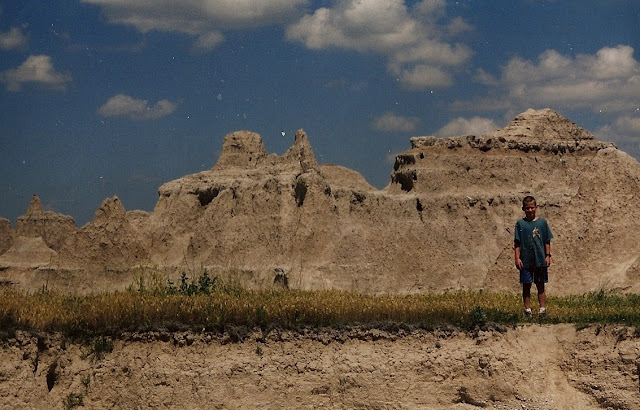 We explored a few of the overlooks, took pictures and returned to the van. There was a deafening silence coming from the back seat. Sometimes the silent treatment could be a blessing. As we neared dinner, stomachs began to growl, which only added to the shoe debacle. I was beginning to get what the Native Americans meant when they said this was a bad land to cross over.
It took about thirty minutes to get to Wall, South Dakota, our next stop. Just before we arrived, I turned around and saw my daughter drawing on a tablet.
“What are you doing?” I asked. 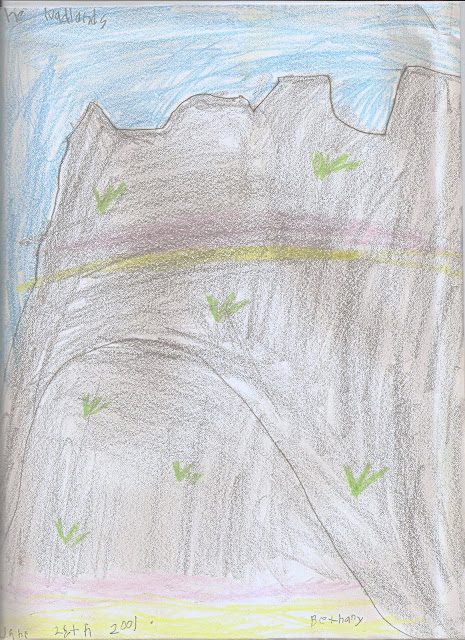 Without speaking, she handed over the tablet. What I saw stunned me. She’d captured in colored pencil the rainbow layers of fossilized sediment that appeared in the rock formations—a masterpiece from a six year old and probably one of the best drawings she’d ever done.
“It’s what I did with my madness.”
“This is beautiful,” I told her. She let go a smile.
For years, we’d encouraged our children to do something constructive with their anger like run laps or kick a ball. Amazingly, she’d gotten it this time. Oh, how I wished I’d always created beauty from my anger.
As surprising as this painting was, nothing could have prepared me for what happened next. When we finally got to Wall, we felt like we’d crossed the Sahara. Thirsty and hungry, we went where all tourists go—Wall Drugs. We sat down at a table in their dining room and studied the menu. I couldn’t believe it when Bethany, the queen of all finicky eaters. ordered a buffalo burger.
Drop my jaw.
I never dreamed she’d actually eat it. But she did, the whole thing.
Aaron, the critter aficionado, had his picture made with a mechanical dinosaur. 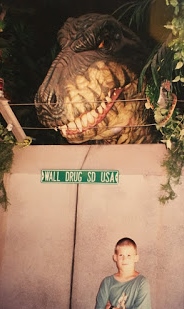 The story of Wall Drugs captured our interest. In 1931,Ted and Dorothy Hustead were considering buying a drug store in Wall, South Dakota. Their families were not encouraging. “That town is in the middle of nowhere,” a cousin said, “and furthermore, everybody there is flat broke busted.” The depression had not been kind to the people of Wall.
But after much prayer, the Husteads decided to go ahead with their purchase. In 1936, after five discouraging years they were nearing the end of their resources trying to establish a viable business. Then in July of that year, Dorothy had the idea to draw in the hot thirsty tourists traveling on 16A by offering them free ice water. They put signs on the highway and the rest is history. At the time of our trip, about twenty thousand people a day came during the summer.
The Husteads believed, "Come, all you who are thirsty, come to the waters..." (Isaiah 55:1). There's a chapel for travelers at Wall Drugs, as the owners have never forgotten how it all started.
With prayer, it’s amazing what God can do in the middle of nowhere.
On a recent business trip, Aaron met and spent time with one of the Hustead's grandson's. When I found out who he was with, I sent him the picture of him with the mechanical dinosaur. They had a big laugh. Bethany is now a vegetarian. 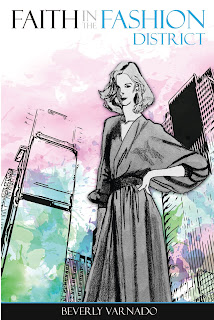 Remember Faith in the Fashion District is now available for presale at many online retailers and at Amazon.


“As a Ford model during the 1980’s, the New York fashion world was my world. Beverly’s encouraging stories of how God moved in that sphere help us realize that no matter where we are— even on Seventh Avenue—God wants to use us for His glory.”
Nancy Stafford
Actress (“Matlock”), Speaker, and Author

Posted by Beverly Varnado at 11:25 AM