How God is never late (and a giveway)

Elaine Crunkleton is the winner of the giveaway this week. Congratulations!!! For the rest of you, more opportunities to win coming soon. Please sign up to follow my blog so you don't miss out.


The countdown is on―thirty days until Faith in the Fashion District releases on August 23. 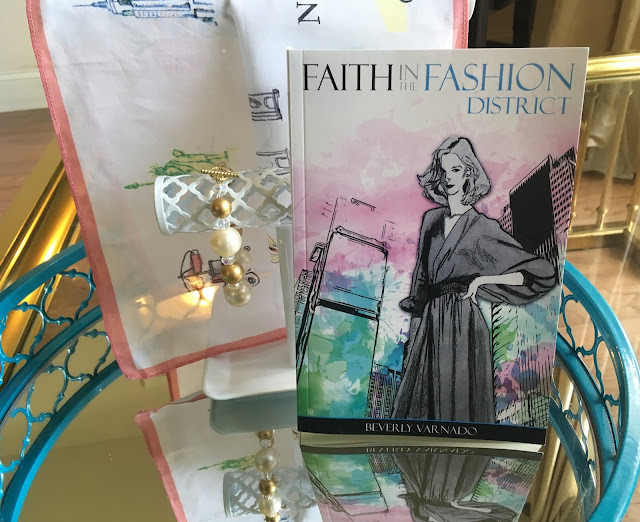 I wrote a bit HERE about what led me to write the book when it first released, but as Paul Harvey used to say, here is the “rest of the story,” or at least part of the rest of the story.


At writer’s conferences, when I ask folks what they’re writing, most say, “I’m writing a book about me.” Memoirs are coming up now in the market, but that's not what I wanted to write. There’s more here on this blog about me than anybody would want to know. What would the book theme be anyway?


Yet, I find myself with a book about to release that is in part, a memoir.


How did that happen?


I’ve written here of our 7000 mile cross country trip with our family in the summer of 2001 and how formative it was in all our lives. That summer I was struggling with a call to write, to do something more than continue to fill up my closet with those journals I’d kept since I was eight.


On a mountaintop in Montana where my husband was the speaker at a family camp, I received a word that seems something of a bookend to what is happening now.


“‘Beverly,’ I heard the worship leader call one evening as I was leaving a meeting. He approached me, ‘I sense God is saying that you’re afraid to go after what God is telling you. I believe he’s encouraging you to do it afraid. And that he will confirm whatever this is to you.’


That night in a dream, I saw a nonfiction book, and the title was from Matthew 7:7, ‘Ask, and it shall be given you’”( from High Places, in the Dream Summer series).


I left the camp believing I had been given a divine directive and began to ask God for that book, sure it was going to happen in a short time.


In the intervening years, there have been many articles, devotions, screenplays, short compilations, and novels, but no actual nonfiction book. At times, the vision for it seemed to grow more and more distant. Along the way, I often struggled with fear of vulnerability and of failure. And then just before God gave me the idea for Faith in the Fashion District, I went through a year of almost being shut down creatively.


I meet starry-eyed writers who believe they’re going to get a contract for a first draft of a manuscript they’ve penned, and I have to walk that fine line of wanting to encourage them but at the same time speaking the truth in love. Their journey is usually going to involve many more drafts, more manuscripts, and more time.


Last fall, sixteen years after God gave me that word on a Montana mountain, I signed a contract for a nonfiction book. It has taken longer than I could have possibly imagined to get here.


The book I never wanted to write turns out to be a book God planned all along. I sometimes get concerned it will be viewed as fluff, not serious writing because of the subject, yet it is the story of how God helped me live out my faith in an environment that was apathetic and even hostile to Christianity.


In Revelation 12:11, we find these words, “They defeated him through the blood of the Lamb and the bold word of their witness. They weren’t in love with themselves; they were willing to die for Christ.”


Faith in the Fashion District is my bold witness, and I pray it is not the story of me being in love with myself but in love with Jesus and that it will help others live out their faith, as well.


Sometimes, it’s a long, long road from vision to realization. If you’re there, my heart and prayers are with you. I don't know if you find this post encouraging or discouraging, but take heart the Bible says, “God is not late with his promise as some measure lateness” (The Message 2 Peter 3:9). Persevere in your calling from God without regard to how long it takes to reach the goal.


In my life, the fulfillment of one of God’s never late promises means August 23, 2018.


I’ve received a few advance copies of Faith in the Fashion District, so I’m having my first giveaway. I’ll have several more giveaways here before the book’s actual release date. The giveaway includes a book, a famous maker New York motif scarf, a bracelet (made by my daughter) of vintage 80’s and new beads plus a New York motif tote bag (not shown above). If you’d like to be considered, just make a comment here or on Facebook and one name will be chosen at random. I’ll post the winner at the top of this post and on Facebook. The drawing will take place this Friday, July 27 at 5:00 p.m. If you don’t win, try again next week.  Spread the word.

The book I never wanted to write turns out to be a book God planned all along. (click to tweet)

Persevere in your calling from God without regard to how long it takes to reach the goal. (click to tweet)

HERE to buy Faith in the Fashion District.
Posted by Beverly Varnado at 6:00 AM

I am intrigued with your book about faith and the fashion industry. I would love to win! Ethel Lytton (Thele)

I can't wait to ready the new book!

Thanks so much for commenting.