Speak no evil and gentle spirits

A few days ago, my sister Tammy sent me a quote she’d seen online. It offered wisdom to always take the high road.


Before I shared the quote, I wanted to authenticate the source, so I went to a shelf in our den, and pulled down volume four from among fourteen. 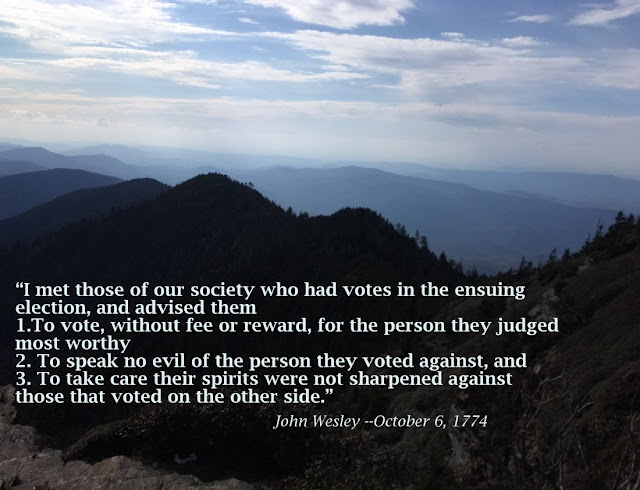 "I met those of our society who had votes in the ensuing election, and advised them, 1. To vote, without fee or reward, for the person they judged most worthy 2. To speak no evil of the person they voted against 3. To take care their spirits were not sharpened against those that voted on the other side.”

Wesley rode over 225,000 miles on horseback (a distance equal to 10 times around the earth), preached 40,000 sermons, and God used him to turn a nation to Christ. I pay attention to what he said, and what he said about speaking no evil of the candidate we voted against and having gentle spirits toward those that voted opposite us is particularly appropriate for today.


You might say, oh it was different back then. Maybe. Maybe not.  The Boston tea party in December of 1773 had thrown a wrench in the political landscape in England, with some feeling the punitive measures too severe against the Massachusetts Bay Colony. It was not all unicorns and fairy dust in 1774.


We have a close friend who is a bishop in Nigeria. When he visits, we drive him around, and he’ll say, “This is God’s country. No potholes.” We laugh, but during an election several years ago, we responded differently and told him we have our problems, too. He said, “Yes, but you can have a change of power in your country without gunfire.”


Back then, we agreed, but since that time, civility has taken a serious hit and political tension is increasing. I’m praying whatever the outcome of these midterm elections today, our Nigerian bishop would still be impressed by our ability in this country to have an election without unrest.

So friends, please vote if you haven’t already done so, but take Wesley’s words to heart.


I saw this video a few days ago and it touched my heart.


Yes, let it be so, “. . . a landside victory for civility.”
If video fails to load https://bit.ly/2NVJWfz
"A gentle answer turns away wrath, but a harsh word stirs up anger" Proverbs 15:1.

Posted by Beverly Varnado at 8:03 AM

Thank you my friend.i so agree. So glad our paths crossed and I hope your writing is going well!!