If you're in a tunnel of fog

As my sister and her husband strolled along the beach, a fog descended on them and grew denser with every step. The thick blanket made it hard for them to determine their location by sight. She could hardly see her hand in front of her.


For some reason, my brother in law took out his phone and snapped a picture, maybe just to see how it turned out.


She sent me the photo, one of the most extraordinary images I’ve ever seen. I offer it to you exactly as she sent it to me. It has not been altered in any way except the addition of my website. 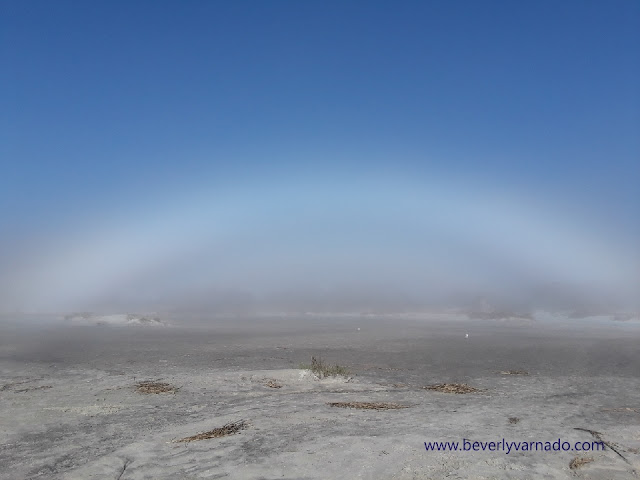 They felt they were in a soupy fog, but unseen to them, the picture revealed an arc of fog underneath a brilliant blue sky.


We may feel in our lives we’re in that tunnel of fog. We're unable to see our hand in front of us and that we've lost our bearings. I know there are several circumstances in my life that seem that way.


It’s comforting to know just beyond the haze, the sun shines and all is clear. He sees. He knows.


That great saint of God, Corrie Ten Boom, once said, “Faith is like radar that sees through the fog―the reality of things at a distance that the human eye cannot see.”


Oswald Chambers also addressed this, “Faith never knows where it is being led, but it loves and knows the One who is leading.”


The apostle Paul who may have drawn the metaphor in the following verse from his travels wrote, “We don't yet see things clearly. We're squinting in a fog, peering through a mist. But it won't be long before the weather clears and the sun shines bright! We'll see it all then, see it all as clearly as God sees us, knowing him directly just as he knows us!” (I Corinthians 13:12 The Message).


So, if you’re squinting right now, continue to love and trust God. He’s got this.

Posted by Beverly Varnado at 8:44 AM