When you're looking for peace

The tuxedo Wilbur occasionally sleeps in his own bed . . .

But more often than not, he’s in Lucy the Aussiedor's space,
night . . . 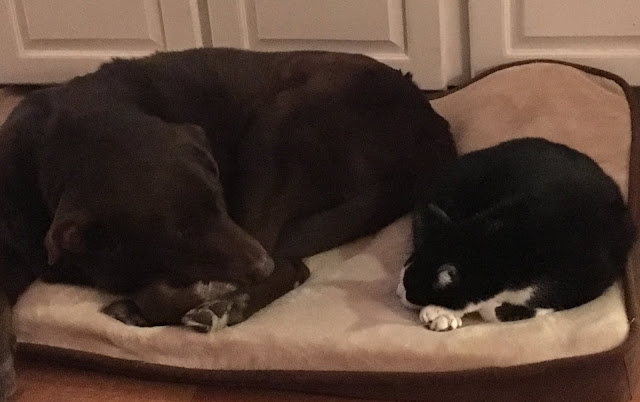 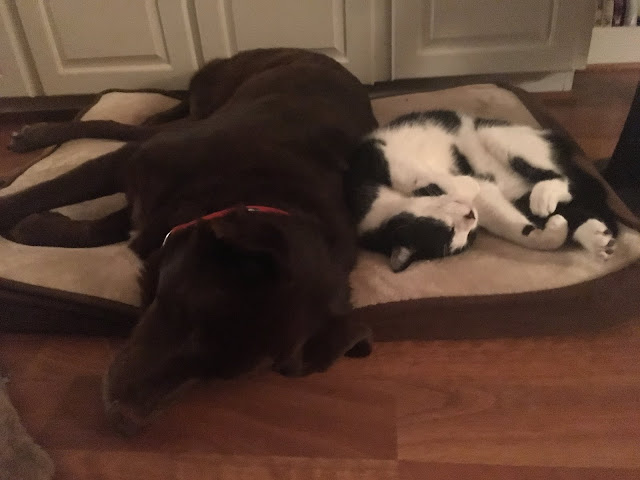 And sometimes, Carl even joins them. 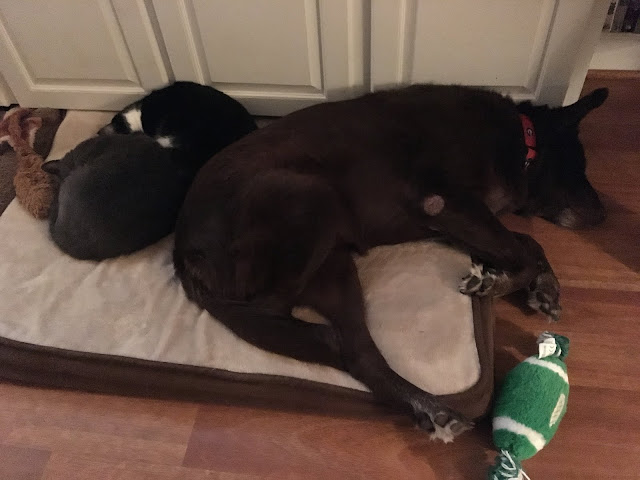 Poor Lucy. She can’t even get her bed to herself, but she doesn’t seem to mind.


Lucy is Wilbur’s home plate, his touch point. In this house, where you see Lucy, you will most often see Wilbur. It never occurs to Wilbur that Lucy outweighs him by sixty pounds and that she could puncture him with her giant teeth. Wilbur trusts Lucy without reservation. He is at peace with her.


Lucy sees Wilbur as a member of her pack. In the past, if another animal showed malice to Wilbur, Lucy was quick to defend him so as Wilbur lies there, his tummy exposed in his most vulnerable position, he is without fear. He knows Lucy will protect him.


All analogies break down at some point, but in a much greater and far more important way, the relationship between these animals causes me to remember God wants us to be at peace with him. He desires for us to be in such a trust relationship with Him, that in our most vulnerable moments, we know our defender will rise up on our behalf. He wants us to know peace in the core of our being . . . no fear.


This past week, Jerry wound up in the ER with cardiac issues, which after a few days of testing in the hospital turned out to be atrial fibrillation. It was the least of several issues they were checking him for, so we were glad no further procedures were required and we could leave the hospital with only a medicine change. For a man who already has several heart stents, this was great news.


I said all of that in just a few sentences, as if it were no big deal. However, in the middle of the process, with him still having cardiac symptoms and doctors having no answers, I had to make a decision about whether I was going to trust God or have myself a little freak-out. In my vulnerable moment, the freak-out was awfully appealing. However, I opted to trust and not allow myself to fall victim to controlling fear.


I reminded myself of what I wrote about last week that God is faithful. God has never abandoned us. God saw this coming and had a way through it. And He did.


Our hearts are full of gratitude for all God has done and what He continues to do.


So, my friend, you may be going through something right now, and be tempted to have your own freak-out. You may be feeling incredibly vulnerable. I have two words for you―trust God. Don’t let the fear win. No matter what happens, God can enable us to hold on to peace no matter where we are . . . in the emergency room or any room.


Remember Wilbur and his upturned white belly lying next to that big brown dog, and take comfort God watches over you. Curl up next to Him.


“You will keep in perfect peace those whose minds are steadfast, because they trust in you” (Isaiah 26:3).

Posted by Beverly Varnado at 8:42 AM