When you don't see a harvest 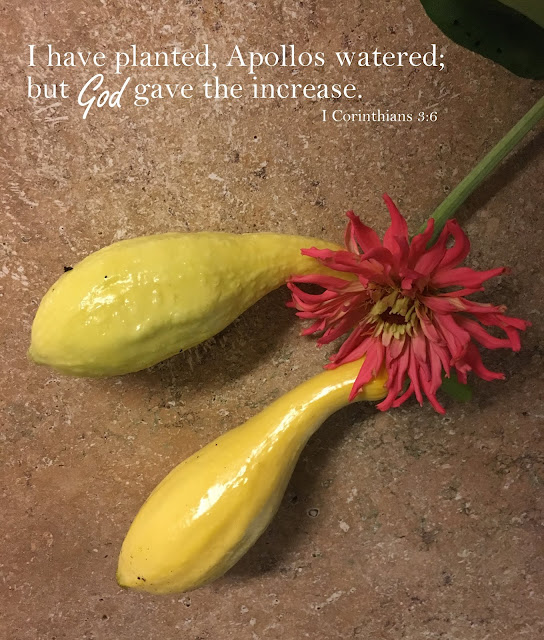 Once more, we tried to have a garden this year.


Neither Jerry nor I are in possession of what some call a green thumb.


I do. I want a green thumb. I plant. I water. I go back year after year and try. It’s in my blood. My parents, grandparents and other ancestors could grow things. I should be able to do it. But alas, year after year I face disaster--drought, worms, critters, soil  so hard it takes a jack hammer to break up.


This year, I told myself, was going to be different. We’d go small―just an 8 x 8 raised bed. We’d be really focused and that was sure to bring a return. We bought the landscape timbers and soil. Who knew dirt could be so expensive? Jerry, God bless him, built the bed. After the soil was mixed, we sank squash, cucumbers, tomatoes, okra, and a few zinnias into the ground. Trying to be proactive because I knew we had rabbits, as the plants began to grow, I covered them in netting. And I watered. When temps hit the nineties in late May, I had a very inflated water bill to show for it.


Then I noticed just as the plants bloomed, the blossoms disappeared. I bought poles and more net, and made a fence all around the bed. But three things told me I had a bigger problem than rabbits. The net fence was pushed over, the tomatoes were chomped, and Lucy was going crazy barking in the middle of the night, which she never does. Jerry got up to check on her one night, let her out in the back yard, and she chased a four point buck back there who  jumped the wooden fence around our yard like it was nothing.


We have harvested a few tomatoes, one zucchini squash, and about six yellow ones. All for the low, low price of $350.


All this reminds me of a few ministry experiences we’ve had. We planted, we watered, we tended, and after a very expensive and lengthy investment, the return was not what we hoped. So frustrating.


I guess we think if we follow the plan, do what we’re supposed to do, there’s going to be a guaranteed return. There’s not.


The return is up to God.


As my husband is fond of saying, “We’re in sales, not in management.”


We have to remember, people have choices, and also, whenever we’re investing in the kingdom, the enemy is going to wage war against that work. He will target the Achilles heel and is relentless in his onslaught. Even though we may engage in spiritual warfare through prayer, sometimes there will still be disappointments.


But here’s the thing. We cannot give up hope. We have to keep planting, and tending, and watering. Because who knows what one of those seeds might turn out to be. A dry good salesman once agreed to teach a Sunday school class of teenage boys. Burdened for one of his students, he went to visit him at his place of work where he sold shoes. There in the back of a shoe store, the young D. L. Moody gave his life to Christ. It is said D. L. Moody was used by God to win more than a million souls to Christ.


You may right now be planting a seed, which could turn out to be a D.L. Moody. So don’t give up, friend. Do your part and leave the results to God. Only He knows what they will be.


As for me, I’ve already started thinking about next year and how I’m going to deal with my gardening issues. I will not be defeated.


Is it wrong to hope someone else in the neighborhood gets the gardening bug, too, and maybe gives the wildlife another feeding area?

Available HERE.
Posted by Beverly Varnado at 8:22 AM

Do a fall garden. They are so much easier. Plant kale or other greens.