Because Jerry is a University of Georgia football letterman, a couple of years ago we were invited to attend the naming event for the Payne Indoor Practice Facility at UGA honoring letterman and former Olympics Committee CEO, Billy Payne and his father, Porter. Billy Payne and Jerry were teammates.


We wrote about that night on One Old Dawg. But because we met someone that evening whose wisdom and advice is essential for the times we live in today, I want to highlight a bit of it here.


Jerry and I had the very great privilege of meeting Andrew Young, who has been a U.S. Ambassador, U.S. Congressman, and Atlanta Mayor. As he spoke that night, he covered the challenges in bringing the Olympics to Atlanta. He and Billy Payne traveled to over 100 countries, a black man, and a white man with such love for each other, it gave the world a new picture of the American South. 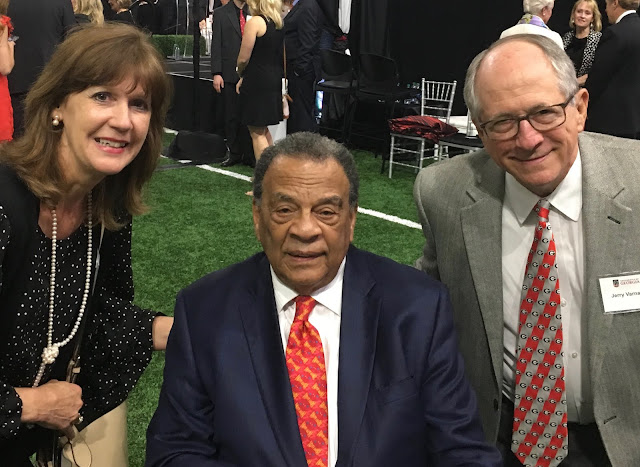 When the two men began pitching the idea of bringing the Olympics to Atlanta, many thought it an impossible task. But their close relationship and perseverance yielded an extraordinary result.


Young praised Payne and credited the hand of God for their successes. I had not realized that Andrew Young started his career as a pastor, but his faith in God was obvious as he spoke.


Young was a close ally of Dr. Martin Luther King and participated in civil rights demonstrations in Birmingham, St. Augustine, Selma, and Atlanta.


He related a story in an interview this week of the protest in St. Augustine where he and other marchers came face to face with a white supremacist group. Instead of violence, they chose peace and responded by singing. He said that choice led to action in congress, the 1964 Civil Rights Act. Another extraordinary result.

In a powerful op-ed piece in the AJC this past Sunday, Andrew Young wrote of the terrible injustices in our country, as well as the protests, but he also pointed to the viral plague that is wreaking havoc on our global economy. He pointed to partnerships and said, “We must find a way to live together and work as brothers and sisters . . .”


We’ve read it and said it many times during this pandemic, “We are all in this together.” But that applies to other challenges as well. Though it may seem we are much divided in many ways in our country, the truth remains, we are in this together.


In Dr. King’s “I Have a Dream” speech, he says that by faith, “we will be able to hew out of the mountain of despair a stone of hope. With this faith, we will be able to transform the jangling discords of our nation into a beautiful symphony of brotherhood.”


It seems at every turn we are facing as Dr. King said, “a mountain of despair” right now. But as he also says, it is by faith we will be able to make of it a “stone of hope.”


So, let’s pray and look to the only One who can heal our broken lives, our splintered hearts, and our fractured souls. Let’s ask him to root out racial bias in all of us. We must reach out and love despite our differences. Who knows what God might do with any of us if we fully surrender and allow him to use us as vessels to heal this fragmented world? Who knows what unexpected beautiful thing might result?


Because as you might have heard, we are in this together.

"Finally, all of you, be likeminded, be sympathetic, love one another, be compassionate and humble" (I Peter 3:8).
Posted by Beverly Varnado at 9:45 AM