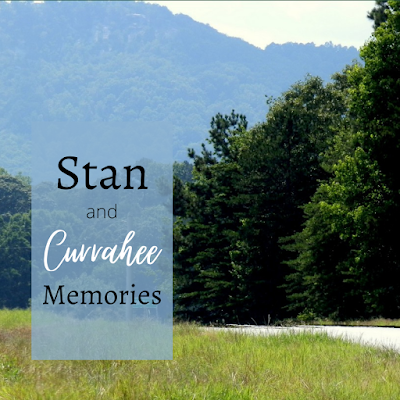 Stan and I were only a few grades apart in school, but our paths didn’t really cross until several years ago when my sister, Tammy, made me aware of a social media group he helped to administer called, “Currahee Memories.”

Currahee is a mountain in north Georgia made famous by the movie Band of Brothers, which depicted the story of the paratroopers who trained on that mountain in preparation for D-Day. For those of us who grew up in sight of the mountain, it was and continues to be as one of my book characters says, the wallpaper in our minds.

As one of the site administers, Stan, and others posted remembrances of times gone by—local landmarks, photos of ancestors, street scenes, high school graduation pictures, and so much more. It was fun to check in to see the daily stream. Although, I haven’t lived in the area in decades, I always found something of interest. Interspersed among the posts were photos of the mountain, in every season, from many vantage points, and in all kinds of weather.

When the pandemic hit, for a long while, none of us knew what we were facing. I found myself struggling with for lack of a better word, homesickness. With parents and grandparents who lived in the area now all gone, I longed to hear the comforting voice of my mother’s mother who died over forty years ago. Maybe she’d say, “Honey, I lived through the Spanish Flu Pandemic, and you can live through this, too.” And if I could have spoken to my dad again, he might have repeated something I’d heard him say many times, “Whatever anybody else can do, you can do.” That would include facing a pandemic.

Of course, I couldn’t talk to those people, again, but what I found is that “Currahee Memories” served to keep me connected to that part of my life.

In June of last year, my sister called and asked me if I checked the site that day. When I did, I saw a smiling photo of our dad wearing a bow tie, just like he wore when I was a little girl—such a comforting picture. Then folks started sharing about him. I probably wasn’t supposed to, but I screenshot the posts and shared them with my children so they would know how many people remembered their grandfather.

I messaged Stan, thanked him for the photo, and asked him where he found it because I had never seen the picture before. “In an old college annual from 1958,” he said. His love of history caused Stan to plunder library and newspaper archives to find material for the site. I can’t imagine how many hours he spent doing so with no thought of profit for himself.

My husband is a pastor and we were in ministry to so many who were hurting and grieving this past year in addition to what was happening nationally. Stan made it clear he wanted the site to be a safe place, free of political posts, and he kept that promise. On a sad day, it was nice to go there and know we wouldn’t be bombarded from one direction or another. As my sister says, “Stan was a bright spot in a very dark year.” I believe she speaks for many.

I hardly knew Stan was sick, and then he was gone. I wish we’d had more time with him.

To his family and close friends, I say, please know that when we remember Currahee, we will often remember Stan and all he did for us. As the apostle Paul said in Philippians 1:3-6, “I thank my God every time I remember you.”

Thank you, Stan, for helping those of us who share a common love of the mountain to find glimpses of home and live through one of the hardest years we’ve ever had to face.

As the years go by, your work will continue to bless us. You are one of our best Currahee memories.

With much love and gratitude,

Posted by Beverly Varnado at 8:55 AM