4 Changeless truths for these changing times

On Sunday night, one of the American Idol contestants sang Bob Dylan’s, “The times they are a changin.” When the show was recorded in January, the contestant couldn’t have possibly known how prophetic that title would be when the show aired.


I would normally be practicing with our symphony chorus right now for the pops concert in early May. Instead, the practices and spring concerts have been canceled for the first time in forty-two years. The grand hall at the convention center where our concerts are held has been converted into a factory producing devices that spray disinfectant to fight the virus.
In New York’s Central Park where I often strolled with co-workers back in the day, emergency field hospitals have been erected. Those deserving of combat medals do not wear military fatigues, they wear white coats and scrubs, and are sometimes going into battle without even the most basic equipment like masks. Because of that, high-end designers will not debut their recent designs on the runways in Paris and Milan this season but are converting their factories to produce hospital gowns and masks.
Our grandson and others like him will lose the last part of his senior year and we hold out hope the graduation ceremony will still take place some time in the future.
And who knew only weeks ago that words like social distancing, coronavirus, and disinfectant would be so prevalent in our conversations.  Nearly a quarter of the world is in lockdown.


“The times they are a changin.” 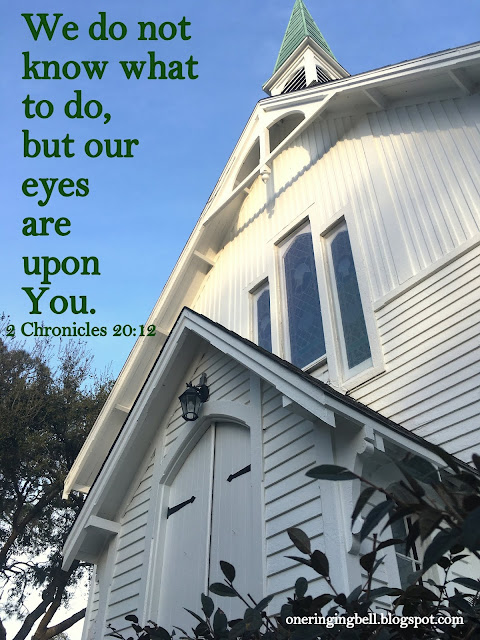 I’ve been thinking of a story which may be familiar to you about a King who faced changing times and his surprising response.


A dire report emerged of an enormous invading army rising against him, edging ever closer, only around sixty miles away.


What would the king do?


Issue a call to arms? Rally the troops?


He did neither. The first thing he did was pray and call for a nationwide fast.


People came from far and wide and when they had gathered, the king stood. After beginning with praise, he prayed, “If calamity comes upon us, whether the sword of judgment, or plague or famine, we will stand in your presence before this temple that bears you name and will cry out to you in our distress, and you will hear us and save us” (2 Chronicles 20:9).


Then from somewhere in the assembly a voice arose in response from a worship leader’s descendent, “This is what the Lord says to you: ‘Do not be afraid or discouraged because of this vast army. For the battle is not yours but God’s . . .”(2 Chronicles 20:15).


On hearing this prophetic word, the king bowed with his face to the ground and the people also fell in worship.


Then worship leaders stood and began to raise their voices in praise to God.


When the King set out to meet the army, he reminded everyone to have faith and then he put the singers out front who sang, “Give thanks to the Lord for his love endures forever.” As they began to sing and praise, God set ambushes and the invading army was soundly defeated.


When the spoils had been gathered, the King and his people returned home with rejoicing, thanksgiving, and praise. The first thing they did was go to house of God.


What lessons are in this for us in our changing times?


Like the King, our first response should be to pray. It is not an action of last resort, but our first hope. Yes, of course, we rise to do all the things that are required and needful but we must pray and maintain our relationship with God and seek him first.


Next, we recognize our powerlessness and set our eyes on God. We do not rely on our own strength. Our trust and our eyes must be on Him, not in our efforts.


Then, we do not let fear hold the reins in our hearts. Instead of focusing on the vast army against us, we remember that God is fighting the battle for us.


And last, worship and thanksgiving should be practiced often so that they are a way of life.


These lessons from 3000 years ago in the life of King Jehoshaphat when confronted by a huge army wing through the ages as true today as they were then as we face a global pandemic: Pray, Rely on God, Fear Not, Worship.


They come to us as changeless truths for these changing times.


Dear friends, praying God’s protection for you and that you would experience his presence and peace in a greater measure than ever before.

Posted by Beverly Varnado at 12:30 AM