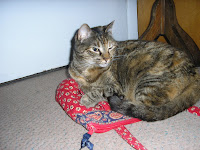 The first time a friend I’ll call Rose met our cat Misty, Misty seemed to fall under some sort of spell. She responded to her as she had to no other visitor to our home by climbing in her purse, onto her lap, and marking her legs. I accused Rose of dusting herself with catnip.

I’ll say they do. Somehow Misty knows this woman is a cat lover down to Rose’s DNA. Every subsequent visit has been just like the first with Misty going Rose crazy. I’m sure this is reinforced when she takes care of the cat while we’re away. After one vacation we came home and found a strange purse lying in our den with Misty asleep on it. The cat magnet had left it. That purse was followed by many more. Misty hugs, chews on, and climbs in these purses until the captivating scent of Rose is gone.

All this made me think of a verse from 2 Corinthians 2:15. “For we are to God the aroma of Christ among those who are being saved and those who are perishing.” I believe God wants us to be for those around us as winsome as Rose is to Misty. The fragrance of Christ in us should be so strong that others know without us even having to tell it. To borrow a line I heard at a recent ordination service, this takes “a profound commitment to serve God.”

Whether a cat lover or not, all of us can learn a thing or two from Rose and Misty.
Posted by Beverly Varnado at 12:00 PM No comments:

I awoke this morning making a mental list of the activities ahead for the day. With a few of them I was beginning to grow “weary in well doing” even before the day began. Ahead were opportunities to which I knew God had called me, things to which I usually looked forward.

Today not so much.

Then a few lines drifted into my spirit from a song I hadn’t sung in years—“Give of Your Best to the Master.” The line that spoke this morning was, “Throw your soul’s fresh glowing ardor into the battle for truth.” I thought I knew what “ardor” meant but looked it up just in case. Mr. Webster says “great warmth or intensity, as of emotion, passion, or desire.” So, “throw your ‘passion’ into the battle for truth.” God was asking me to be passionate about these things. To move beyond the way I felt--to give my best.

To make sure I got it, God gave me a nugget from My Utmost for His Highest. “The proof that we are rightly related to God is that we do our best whether we feel inspired or not.”

I know from experience we often don’t know the consequences of our service for God. We sow the truth, not understanding how far it might go. Only occasionally do we get to see the actual harvest. But, God simply calls us to follow him passionately and asks us, asks me, to give my best.
Posted by Beverly Varnado at 10:48 PM No comments:

Email ThisBlogThis!Share to TwitterShare to FacebookShare to Pinterest
Labels: best, Give of Your Best to the Master, Oswald Chambers

Yesterday, I signed an agreement with an independent production company to option my screenplay, “Give My Love to the Chestnut Trees.” Wow, I can’t believe I even wrote that sentence. It seems so farfetched. In fact, the more I thought about it yesterday, the idea of actually getting this script developed into a film seemed to grow more and more impossible. I thought about how hard it would be for the producer to find investors in this economy, and how difficult it would be to get the caliber of actors we’d need on a tight budget. My imagination ran to the negative. In fact I even emailed the producer that the task seemed impossible. At the end of what should have been an exciting day, I felt low.

I picked up the Upper Room devotional guide which I usually read earlier in the day, but hadn’t for some reason. I’ve been published in the Upper Room and have another devotion coming out on December 27th of this year. I love them because the devotions are translated into 49 languages and go into 100 countries. The meditations are even read on a radio broadcast that reaches into Middle Eastern countries. Okay, enough of my plug for the UR. The title of the June 21st piece grabbed me--“Impossible?” The author, Lana Vannarsdall, talked about a project to which she felt God was leading her, but it seemed impossible. She wrote about Nehemiah--how he took on the tremendous job of rebuilding the walls of Jerusalem. By God’s help he did it in 52 days. Her statement, “It isn’t the magnitude of the task; it’s the magnitude of our God that counts most,” really spoke to me. Then she asks, “What impossible task am I facing today?” I had the answer to that one. She concludes.”When God ordains a project, God provides help from beginning to end.”

When I told my husband, Jerry, this story, he simultaneously laughed and cried at this amazing “coincidence.” It was if God came in the room to soothe my fears, and say, “I’m with you every step.” So, it looks like we’re going to make a motion picture. It may not be easy or quick, but it will be by God’s help.

To read the entire devotion by Lana Vannarsdall, go to http://www.upperroom.org/devotional/ and click on June 21, 2010.
Posted by Beverly Varnado at 11:55 AM No comments:

6-20-10
A Prayer
Today we said goodbye to a lifetime of friends as my husband retired as Pastor of Gateway Church after twenty-five years. My blood shot eyes may take several days to recover. Though we knew it was time, though we knew God was redirecting our lives, still, the process was painful.

Interestingly enough for me, just two days ago I received a contract offering to produce one of my screenplays, Give My Love to the Chestnut Trees. This was the result of many years of work and prayer, but I’ve hardly had time to think about what it means, because of all these goodbyes. I know once more, I’ll be traveling a sharp learning curve as I navigate the waters of film production--a journey for which God has been preparing me for some time. I look forward to what God will do as I board this ship.

Early this morning I read the concluding prayer from Hebrews. “May the God of peace…equip you with everything good for doing his will, and may he work in us what is pleasing to him, through Jesus Christ, to whom be glory forever and ever.” I offer up this prayer for these precious people of Gateway who we’ll always hold in our hearts, and I offer it for our family as we look ahead to what God has for us.
Posted by Beverly Varnado at 7:46 PM No comments:

Email ThisBlogThis!Share to TwitterShare to FacebookShare to Pinterest
Labels: film production, Gateway, Give My Love to the Chestnut Trees, good-byes, Hebrews 13, ship

6-18-10
Transitions
A nice way of saying my whole life has been turned upside down. After struggling with the html, I’ve decided to leave the off-center heading on my blog. It serves as a clue. I’m feeling a little off center myself with a child graduating, a husband leaving a pastoral appointment after twenty-five years, and other life changes.

It’s as if I’ve been shot out of a cannon while simultaneously struggling to write, care for my family, and fulfill other obligations. Someone recently prayed our family would find a wonderful landing place. That’s my prayer as well, and that when all the pieces fall to the ground, we would see God’s hand in the midst of them.

All of this has made me focus once more on what doesn’t change. Years ago, faced with another transition, a very wise man directed me to these words from Hebrews 13, “Jesus Christ is the same yesterday, today, and forever.” What a balm to my soul when it seems I’m living in a blender. After a little investigation, I find the Hebrew word translated as “same,” actually means wall. As in straight up, strong, not leaning. Jesus is a wall, yesterday, and today, and forever. A wall of protection, safety, faithfulness, mercy, hope, and love. More than can be told, at least here by this writer. I thank God for his unchanging love for me.
Posted by Beverly Varnado at 7:13 PM No comments:

All Comments
Please read a wonderful review of Give My Love to the Chestnut Trees on Eddie Snipe's blog here.